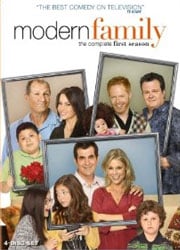 Modern Family started last year as the new show on the block. It was a fresh of breathe air, and just downright hysterical! Now it’s an Emmy winning comedy and about to embark on its second season tonight (Weds 9pm EST) as well! I’ve been a fan of the show since Day 1 and think it’s probably the funniest show on TV. I’m sure not everyone will agree with me but that’s what I think. If you love the show, the DVD or Blu-Ray is something to own!

The TV show is centered around Jay Pritchett (Ed O’Neill) and his kids Claire (Julie Bowen) and Mitchell (Jesse Tyler Ferguson). Jay is married to his second wife Gloria (Sofia Vergara), a younger and sexy Colombian woman who has older minded pre-teenager Manny (Rico Rodriguez) from her previous marriage. It’s a bit of culture shock for both of them. Claire is married to doofy Phil (Ty Burrell), and they have 3 children Haley (Sarah Hyland), Alex (Ariel Winter) and Luke (Nolan Gould). Then there’s Jay’s gay son Mitchell, who lives with his partner Cameron (Emmy winner Eric Stonestreet), and they just adopted a baby from Vietnam. The families are close and all live near each other. Each episode deals with all 3 families, some getting the spotlight more than others. The debut season has a lot of different story lines, and it seems every episode can stand on its own. The only continuing storyline I noticed was Phil tripping over the same step on the stairs the entire season.

Some of the season’s episodes include: Phil tries to teach Luke a lesson by stealing his bike, Mitchell and Cam freak out when they bump Lily’s head and end up locking her in the car by mistake, Claire sucks at giving presents and invites the bassist of Spandau Ballet over for Phil even though he doesn’t like the band, Claire and Phil threatened to take Christmas away when they discover a cigarette burn on the couch, Cam dresses up as a clown for Luke’s birthday party, Mitchell tells his Dad that his friend is gay, Jay and Cam have an awkward moment at the gym, Manny gets traumatized from watching a horror movie, The families head to Hawaii towards the end of the season and I could go on and on. I seem like I already have.

The show is set up like a documentary style, where the characters have interviews and talk about what’s happening. The premise isn’t original per say but the execution is perfect. There’s no dumb laugh track, and the dialogue is hysterical and witty. The cast is excellent and all are funny as hell. Yes, even the child actors. The many Emmy nominations for the show were well deserved but of course Ed O’Neill was snubbed. Eric Stonestreet’s win was great at the Emmy’s because he’s probably the funniest character on the show. Though, Ty Burell is definitely up there and has raised the bar for dumb Dads on TV. He thinks he knows it all when it fact he doesn’t. Julie Bowen and Sofia Vergara on the show are really good, and nice eye candy as well. Some people probably can’t stand Sofia’s accent but I love it and find it very sexy. For being a new season, they certainly had their fair share of great guest stars like Edward Norton, Elizabeth Banks, Shelley Long, Fred Willard, Judy Greer, Benjamin Bratt, Chazz Palminteri, Kristen Schaal, and Minnie Driver. Having the guest stars is an added bonus because the cast alone is what makes this show great!

The bonus features were also excellentand each disc has it’s fair share of deleted or extended scenes and interviews. The last disc has a lot more featurettes like gag reel, making of and other things worth checking out. Usually most deleted or extended scenes aren’t that special but these were just as funny as original footage. I was glad to see the creators decided to put effort into making the bonus features better than most TV shows’ DVDs. Highly recommend watching all of them after you’re done with the episodes.

In a nutshell, Modern Family became my favorite comedy on TV overnight. I don’t think everyone will like it but it certainly has enough stuff for everybody. Give it a shot and watch more than 1 episode before deciding if you love or hate the show.