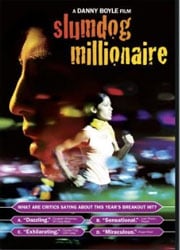 Slumdog Millionaire cleaned up at the Oscars, and I didn’t see the movie until it came on DVD. While I think it’s a great movie with fantastic acting, an awesome soundtrack and an interesting storyline; I’m not sure it was Best Picture worthy.

The movie is about Jamal, who’s on the Indian version of Who Wants to Be a Millionaire game show. He’s an uneducated, young man from Mumbai who grew up with his Brother as orphans. They would go from each slums, and other shady neighborhoods and try to find ways of getting by. They end up being forced to work for a gang that exploits children for begging and prostituting. While that is happening, Jamal falls in love with a girl named Latika. After escaping the group with his brother, Jamal doesn’t stop looking for her and goes against the crime lords including his older brother who are exploiting her. The movie is set in various flashbacks and you find out why Jamal knows all the answers to the questions. But does he know the final question?

Slumdog was shot really well by Danny Boyle, and the story was told in a clever way. I loved the use of flashbacks to drive the story, which is sort of similar to the way Lost the TV series is shot. There’s a little twist at the end where you think everything already happened, but that’s not entirely true. So it gives you a little bit more suspense because I wasn’t sure what was gonna happen. I thought the movie should have won some Oscars but I didn’t think it deserved the Best Picture. But now that I think of it, I couldn’t think of any other movies that were better than Slumdog Millionaire. Maybe I’m still bitter that The Dark Knight didn’t get the respect it deserved.

I’m not really sure why there’s some dance number during the credits though. It’s not like it’s a fun movie that requires some big musical Bollywood number. Movie was dark (kid torture, poverty, etc. etc.), sometimes had a few funny moments (kid Jamal falling into shit) but dancing in the credits? I don’t get it. Another problem I had with the movie was I felt there was way too many running and chase sequences. We get it; you don’t need to show us the entire thing of the kids running away from trouble. I think if they trimmed some of those scenes down the movie would have had a better flow. But besides those 2 things, I didn’t really have any problems with Slumdog Millionaire.

If you get the DVD, there are a few typical special features to watch after the movie. There’s a making of featurette with Danny Boyle, some deleted scenes (more running of course), audio commentary and few other things. Slumdog Millionaire was an excellent movie and worth buying if you like interesting dramas like this one. I’d recommend getting this on Blu-Ray if you can.