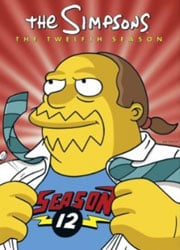 It’s been awhile since last watching The Simpsons, but glad I got the Season 12 DVD set sent to me because this season was actually really good! It has a lot of memorable episodes for me, with lots of funny quotes that I still quote to this day.

The 12th season of the Simpsons starts out with the usual Treehouse of Horror (XI to be exact). The 3 part segments include Homer dying from broccoli, Simpsons spoof Grimm Fairy Tales, and the Dolphins take over Springfield. The next episode is about Springfield having a civil war and splitting it up into two towns. It takes the rock legends The Who to bring the town back together again. After that, the episodes are hit or miss but mostly a hit with me. Some of the episodes I enjoyed this season include: Homer creating his own website and spreading rumors about the town, Homer and Flanders rescue the kids at the school when they are snowed in, Homer goes on a hunger strike when he finds out the Isotopes potentially might be moving to New Mexico, Simpsons win a trip to Africa, and a Hobo on a train tells the Simpsons some tall tales.

Believe it or not, most of this season is ten times better than Season 11. I remember thinking that the show went downhill a lot during Season 11. But thankfully, Season 12 brought things back up with a lot of quality episodes. I’m not sure when I got disinterested in the show but it was a lot later in the series run. But the older episodes up until around the 15th season I watched intently. The one episode I hated during season 12 was when the kids become a boy band. I just can’t stomach it and sit through the episode; even though I know it’s a spoof on that whole lame boy band genre. One of my favorites was Skinner’s Sense of Snow. It’s an episode I love to watch around Christmas time. Skinner’s line at the end of the episode, telling his gerbil to chew threw his ball sack still cracks me up. I forgot how funny this season really was. Sure, it might not be as good as the other seasons but Season 12 is definitely worth watching again on DVD.

The thing I love about the Simpsons DVDs is the menus and audio commentary. I didn’t get a chance to listen to the audio commentary this time around but the menus are hilarious. The menus are various scenes of people waiting on line at a comic convention. Comic Book nerd is next to the celebrity, allowing people forward. It’s always my favorite DVD menus of any DVD. Other extras include deleted scenes, best moments of Comic Book guy, scenes from Global nerdfest, I mean fanfest and some commercials. The funniest deleted scene is one of the members of the Who teling Marge to fuck off. It wasn’t bleeped too, so I was kind of surprised to hear it. But I guess that’s why it was deleted. One thing to complain about is the packaging. Not the stupid head DVD case, but the other one. The inserts are folded up like a comic book, but the way the DVDs are is destined to be scratched in no time. From what I heard, last season was the same way so I guess Fox isn’t really listening. Oh well, I’ll try my best to not scratch the DVDs.

Season 12 of the Simpsons is one of the better, later seasons and worth another watch or two. So be sure to get the DVD, which is out right now! Let’s hope Season 13 has better packaging that won’t ruin the discs.