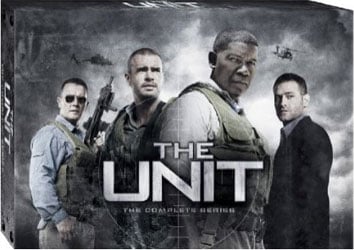 The Unit was an excellent underrated TV series that got better as the seasons went along. The characters were likable, badass, and each episode felt like its own military movie. If you haven’t seen an episode of the Unit yet, it’s a no-brainer to get the complete series gift set!

The Unit was created by David Mamet, and Shawn Ryan of the Shield wrote a lot of episodes and was one of the showrunners. The TV series lasted 4 seasons on CBS and starred Dennis Haysbert as Sergeant Major Jonas Blane (a.k.a. Snake Doctor). Snake Doctor lead the Unit, which was a top secret Special Forces group consisting of only a few men. The Unit specializes in counter-terrorism but they get picked to handle other things as well. The men answer to their commanding officer Colonel Tom Ryan (Robert Patrick) and the President of the United States. The men and their families live on base at Fort Griffith, and have fictional cover-up jobs. Their wives are also in on the cover-up and can’t tell the truth outside of the Unit. The only thing the wives don’t know about is the missions and where their husbands have been deployed.

The other men in the Unit consist of Mack “Dirt Diver” Gerhardt (Max Martini), Charles “Betty Blue” Grey (Michael Irby), Hector “Hammerhead” Williams (Demore Barnes), and Bob “Cool Breeze” Brown (Scott Foley). The first season introduces the Unit, and their families. You see how they operate and what they do and you realize how many close calls they have. Each episode usually is a stand-alone episode, for the most part anyway. One of the biggest storylines of Season 1 involved Mack’s wife Tiffy having an affair with Colonel Ryan. Sleeping with another man’s wife is a big no-no to begin with, it’s an even bigger no-no in the Unit. That storyline finally comes to an end in the 4th season. Another storyline involved Jonas’s wife Molly trying to find a woman who conned her out of their life savings. The second season introduced some more characters and had more episodes. Season 2 saw Mack & Tiffy continue to have marital problems, the affair with Col. Ryan still pops up and Tiffy gets involved with covering up something Ryan’s wife did. Towards the end of the season, the CIA tries to recruit Bob and try again in the last episode of the season. The Unit gets investigated and could be brought up on criminal charges by the Government and could mean the end of the group. That storyline continues into the first few episodes of the short, Writer’s Strike season 3. But things get uncovered and patched up and The Unit still battles on. One of the biggest storylines that happened in Season 3 is the lost of one of the members of the Unit. Also, Tiffy tries to make some extra cash by working as a waitress/exotic dancer. It’s hard to talk about every episode because each episode is so vastly different. The Unit is all over the world, sometimes in Iraq, down in Central America, US, pretty much all over.

The 4th and final season of the Unit introduces a new member of the team. Bridget “Red Cap” Sullivan (played by the lovely Nicole Steinwedell) added something new to the team. It’s always been a boys club so things are addressed about that. Another new member tries out for the Unit, and he successfully makes the team. But things twist and turn like you wouldn’t believe and you can’t figure what side he’s really on. The introduction of Red Cap and Whiplash were exciting and fresh for the show. Another fresh idea that happened during the 4th season was the Unit families having to pick up their belongings and relocate to a new area with a new cover. The first episode, the Vice President is assassinated and The Unit tries to uncover who were behind it all season. The families are at risk and everyone is on their toes about it. The wives even get more involved with the missions to uncover the truth. In the middle of the season, a nerve-wracking 2-part episode involving Jonas’ daughter being kidnapped in Iraq/Syria was really good. Jonas disobeys orders and goes in after her, while getting support from the Unit in some sort of way including guilty conscience Colonel Ryan. The tail end of the season saw the introduction of Whiplash and that story arc involving Red Cap, terrorists, dirty bombs and one confusing but really exciting storyline. The season ends with some storylines coming to a close, but there still remains a lot opened.

The 4th season was probably the best season of the Unit. Characters were already established and fleshed out in the other seasons and things just got fresh and new again. Not like the previous season weren’t good but the final season stood out. At least the show ended on a high note. It sucks for fans that we invested our lives into this show for 4 years and CBS canceled it for some reason. It got great ratings, it had a likable ensemble cast, dedicated fanbase and exciting & interesting storylines. So what gives? Too much money to produce the show? Dennis Haysbert asking for more money? CBS moving it’s time around like crazy? All of those could be factors for sure. I really hated CBS for putting the show at Sundays at 10pm because it NEVER aired during that time. You always had to tape the shows after the Unit to see the entire episode or you had to watch the episode online. I wish they just kept it on the air on Tuesday.

What I love about the full set is now I own all the episodes and can have an awesome marathon of the Unit. Well it’s impossible to watch all the episodes back to back but definitely could watch a few episodes a night. I didn’t really see the first season that much since I came into the show half way through the second season. It wasn’t until then that I realized how excellent this TV series really was. I love military movies and TV series like Band of Brothers, Saving Private Ryan, and Black Hawk Down so the Unit feels like those films to me. We got something different each week. I wasn’t always interested in the wives and families living on the base, but in season 3 and 4 they made their characters more interesting. When it came down to it, I was there to see the missions of the Unit. The addition of Nicole Steinwedell was great for the show, considering she’s gorgeous and can kick ass when she needs to. She doesn’t play this damsel in distress that’s for sure. Even though Hector Williams was a better fit for the Unit since he had medical training, Bridget Sullivan fit in nicely. I just wish we got to see more of her beyond Season 4. I also wish we knew what was going to happen to Col. Ryan and Snake Doctor & his family.

Each season DVD set contains audio commentary on select episodes, featurettes, some trailers, and deleted scenes. The 4th season extras included 3 featurettes: Into Hell: A Brotherhood Divided, Shadow Riders: A Western Come Undone, Snake Doctor: A Leader Among Us. The Into Hell featurette was about the 2 part episode about Jonas’ daughter and Col. Ryan feeling guilty about what he has done. The next featurette shows the cast and crew dealing with shooting on location with horses. Well not shooting horses, but riding them. It was the first time in the series that they had to ride horses so the cast had to get training for that. Each season has decent extras but I kind of wish there was even more.

To conclude, The Unit will get you hooked if you enjoy military themed shows. This show is probably amongst the best military movies and TV series ever. The execution and production of the show is top notch, acting is great, the writing is terrific and each season brought something fresh. I believe each season got better as it went along. The 4th season featured some of the best episodes ever like “Into Hell part 1 and 2,” “Hill 60,” “Whiplash” and “Unknown Soldier.” I highly recommend this show, and this complete series gift set! Be sure to read our interview with Nicole Steinwedell of the Unit here.

Season 2:
Optional Commentary on Selected Episodes
Paradise Lost: The Making Of The Season 2 Finale Documentary
Mission: The Making Of Sub-Conscious Featurette
Dark Of The Moon: Working With Weapons Featurette