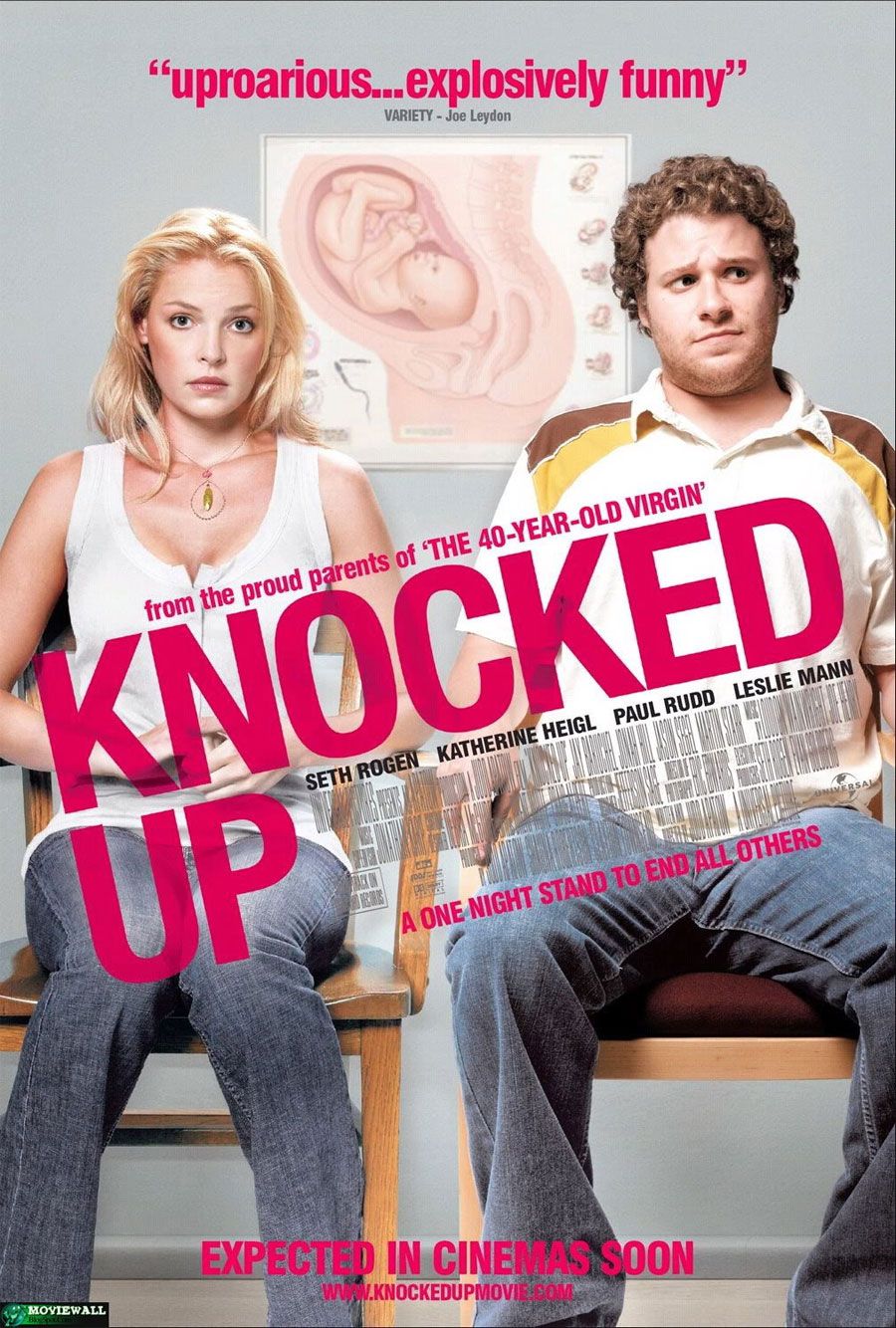 After 40-Year Old Virgin, Seth Rogen said he was starting to work on a movie called Knocked Up with Katherine Heigl. As soon as he explained the premise of the story, I knew it was gonna be a funny movie and a hit. Looks like I was right!


Knocked Up is about a stoner guy named Ben who miraculously has a one-night stand with an attractive TV producer for E! Television. Ben and Alison both get really drunk and don’t use protection when having drunken sex. The next day, she realizes she made a big mistake because he’s a big-time loser who just gets stoned and has no job. They part ways and a month later, she discovers she’s pregnant with his baby. They decide to keep the baby and work things out with each other. Helping the new couple out with things is Alison’s sister Debbie and her iffy husband Pete. It takes awhile for Ben to grow accustom to baby life but in the end, things work out. Like with any baby movie; the pregnant women gets pissed about something with the father and shoos him away. But comes back to her in the end and proves to her that he will be a good father. But unlike other movies like this, Knocked Up has a very realistic feel to it and I can see where many people could relate to this movie.

I thought Knocked Up was a hilarious movie with great dialogue & jokes. Some people might not think its as funny as 40 Year Old Virgin but I disagree. They are both hysterical, but this film has more heart to it I think. The dialogue is a lot funnier and the characters are better developed. I thought the supporting characters made the movie funny. Rogen and Heigl are great and have a lot of funny moments but I found myself laughing more at the non-main characters more. The on-going insults to their bearded stoner friend were really funny. Seth Rogen proves to everybody that he can be leading man material with this movie and I’ve been a fan of his since Undeclared. I always thought he was a funny guy. I loved his digg at Matthew Fox of Lost. “Tell that guy he’s an asshole!” I’m glad Katherine Heigl got to be in something that didn’t require scrubs. I’ve also always found her very attractive, ever since My Father the Hero. Actually, I watched that movie just to see her in that bathing suit. But Katherine can also be very funny, which was a surprised to me. I think Knocked Up is realistic because the couple try to think of what to do with the baby, and decide to keep it in the end. Honestly, I think a lot of children are born when people least expect it and aren’t prepared for it.

I guess people are never prepared for being a parent. I know I never will be and don’t think I ever want children. If there is one character I sort of related to was Paul Rudd’s character. The guy who wants to go out and hang with the guys, or go see a movie by himself and just have some “me time.” Get away from everything and just relax every once and awhile. I think women should do that too, it would make them more sane. But his character was in the music industry, going out to shows every night..shit, his character even had a Tom Waits t-shirt on. Paul Rudd’s character just screams me haha. Of course, I’d like to think I’d be a better father than he was. You made that bed, now you have to lie in it.But I think the only negative comment I can think of about this movie is it was a little long. I think they could have cut out the Vegas scene, because it seemed to go out on this tangent and didn’t really fit in the movie.

So anyway, Knocked Up is one of the funniest comedies of the year with lots of funny scenes, hilarious dialogue & characters and an awesome soundtrack from actor/songwriter Loudon Wainwright III (who also appeared in the movie). It’s pretty hard to out-do yourself on your second full-length movie but Apatow has done it. I’m now looking forward to the next Apatow directed movie!