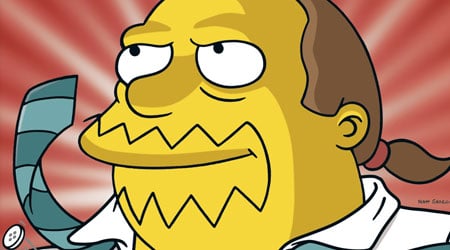 The 12th Season DVD of The Simpsons will be released on August 18th by 20th Century Fox. While the show was starting to go down hill from the 11th season, there were still some standout episodes. The suckiness of the new seasons is starting to make it tough to watch the older episodes. I’m hoping I’ll like the 12th season than I originally did when it aired.

“The Simpsons” The Complete Twelfth Season is loaded with special features including an introduction from Matt Groening; audio commentaries on every episode with Groening and “The Simpsons” Executive Producers, Writers, Actors and Directors; deleted scenes; animation showcases; original sketches; special language feature; featurettes and more. As an added bonus, the set comes in collectible packaging modeled after the overweight and over opinionated retailer Comic Book Guy. The DVD collection will be available for a suggested retail price of $49.98 U.S./$69.98 Canada. Prebook is July 22.

All episodes are compiled on four discs (full frame, aspect ratio 1.33:1). Each episode is presented with English 5.1 Dolby Surround, Spanish and French Stereo and English, French and Spanish subtitles. The following is a breakdown of each disc: