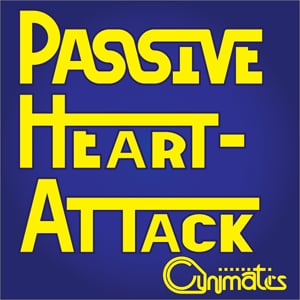 The first that I’ve ever heard of this local Pittsburgh based band was a few weeks ago at a Supervillains show where twelve people showed up. They were a three-piece that covered some Streetlight Manifesto and Leftover Crack songs. That night was also their first ever real gig. Now they have a new album out…which is available for free on their Bandcamp page!

Compared to their abbreviated set from a few weeks back, “Passive Heart-Attack” is all original tunes. It’s short though with only nine songs clocking in at roughly about 25 minutes long. I’m surprised that the Cynimatics didn’t play more of their own tunes at that show because the songs are very fun and full of a lot of third wave energy. They would have definitely come over well with the dozen or so rudies at that show.

Since “Passive Heart-Attack” is short I’ll give a quick song by song breakdown. The first track “People Pretending To Be Friends With Pretend People” is a fast paced instrumental that runs the gamut of the bands’ sound switching between poppy guitar solos, punk and ska…definitely reminded of some NOFX album openers. The second track is the title track and showcases a pop punk side of the band with some ska breakdowns. Track three titled “An Hour Or Two To Go” is one of my favorites. It’s a classic sounding third wave ska punk song with about a dozen or so changes of pace throughout it. Next up is the track “Lift You Up” which is more of the same third wave sound that is heavy on the guitar riffs.

The second half (or as some of us old farts would call it…Side B) of “Passive Heart-Attack” starts off a pop punk song …”Just Can’t Comprehend”…that would make Ben Weasel proud. “Stay With You”…the seventh track on the album is easily the bands’ most danceable. It has a jangly guitar quality that reminds me of Mustard Plug. Track 8 is another pop punk number with a funny name. “Go Home Canada, You’re Drunk” is the last original song on the album before an acoustic version of the song “Passive Heart-Attack”.

As you can tell from the breakdown, the Cynimatics are a little schizophrenic in terms of what they play, but personally that’s what I like in a band. If you have various musical influences, variety is always better than more of the same. For an up-and-coming local band they have some really good songs and I can see the Pittsburgh scene embracing them with open arms. There aren’t a lot of ska or ska influenced bands in the area let alone any good ones…I can count those ones on my ears. I hope to be hearing and seeing more from the Cynimatics in the future.

Bottom Line: An upstart band from the Steel City that aren’t show about switching things up and wearing their influences on their sleeves.
Notable Tracks: An Hour Or Two To Go, Stay With You, Passive-Heart Attack
Overall Rating: