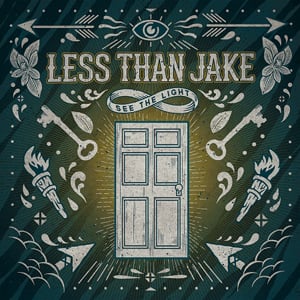 It’s hard to believe that it’s been five years since the release of the last Less Than Jake full length album “GNV FLA”. The band has provided fans with some juicy tidbits with the release of not one…not two…but three EPs for everyone’s listening pleasure. With and since the release of “GNV FLA” it has become more and more apparent that the boys from Gainesville were rediscovering their roots as a ska punk. Does “See The Light” continue with this trend or does their return to Fat Wreck Chords bring out the “In With The Out Crowd” sound in them again?

The answer is that “See The Light” is by far the best ska punk album that Less Than Jake has released since “Hello Rockview”. By far. Hands down. No doubt about it. With their last few releases LTJ had sprinkled in the ska guitar more and more and the horns were once again becoming prominent. With “See The Light” the sound can simply be put as classic Less Than Jake. There is psycho ska, ultra-fast punk, slower skankable beats and everything that used to make Less Than Jake albums not just good, but fucking awesome.

For most bands going back to their roots would seem like a step backwards and in the wrong direction. With Less Than Jake, going back to this style is what suits them best. I’m not putting down the last ten years of the bands’ catalog in any way shape or form…in fact “Anthem” is one of my favorite LTJ albums…but it was so different in sound and lyrical content as were the next few releases that it just sounded like it was from another band entirely.

What I really like about “See The Light” and what can be drawn from albums like “Anthem” and “In With The Out Crowd” is the maturity of the band in regards to the songwriting and lyrics. The songs aren’t just novelty throwaways about Pez or frat parties. This album finally fuses the classic snotty ska punk sound or LTJ’s first few albums with the darker, more down to earth lyrics. “Do The Math” is a good example of this. It’s such a bubbly and fun ska song, but beneath the surface it tells a story of the things in life that time takes away from you and how you’re helpless to do anything about it. That’s not to say that Less Than Jake has turned into an emo band. That’s not happening. There’s still the fun upbeat stuff that, as an older fan of the band, takes me back to a simpler time. “A Short History Lesson” is one of those classic self-deprecating LTJ songs of old and “My Money Is On The Long Shot” sounds like an outtake from the “Hello Rockview” sessions.

I may be a little biased in regards to Less Than Jake since I grew up with them being one of my favorite bands and have stuck with them all these years, but “See The Light” is a great shot in the arm for the band and their fans. It’s as if LTJ had been away from their early sound for so long that it is fresh once again. I guess you can say that they went retro with their own sound. I’ll take it. I’ll take it all the way to the Pez dispenser.

Bottom Line: “See The Light” is a great mix of the old and the new…mostly the old. It definitely fits in with the first few albums. “GNV FLA” and the last few EPs were just a build-up to this ska punk explosion.
Notable Tracks: Do The Math, My Money Is On The Long Shot, John The Baptist Bones, Give Me Something To Believe In, Inc, A Short History Lesson
Overall Rating: