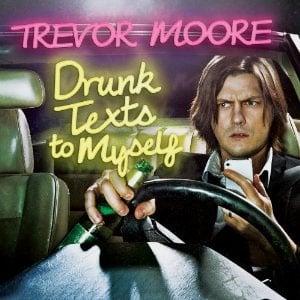 Comedian/actor/producer/whatever Trevor Moore has his first comedy album out now on Comedy Central Records. Moore is from the IFC show The Whitest Kids U’ Know and one of the worst movies I’ve ever seen, Miss March. Miss March was so bad, I felt like giving myself a lobotomy just to forget I actually watched that piece of shit.


So when I found out that Trevor Moore was going to put out a comedy album, let’s just say I didn’t have high hopes. I’m happy to say that Trevor has met my expectations, and released a comedy album that isn’t funny at all.

Drunks Texts To Myself is a bunch of random comedy rap/rock songs, and are more annoying than funny. The Lonely Island he is not. A song about Tom Hanks being an asshole, not funny. Pope Rap, not funny. God Hates The Tips, not funny. My Mom’s a Bitch, not funny. It’s not the subject matter that makes me hate these songs, it’s just that they suck and aren’t funny. Not a chuckle, not a tee-hee, not even a smirk. Stoner college kids might enjoy this crap but I didn’t.