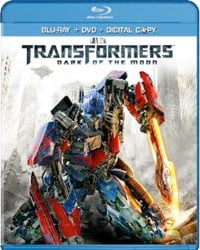 The first Transformers was an unexpected surprise. It was fun, entertaining and had some great action. The second movie was atrocious. With no expectations left, the third movie is far better than the second movie and comes close to the first one.

Transformers: Dark of the Moon starts off with the back story that the moon landing in 1969 was authorized so we could find something on the moon that crash landed there. The astronauts find some device and a giant robot. Years later, we find out that it was a device that could have won the Autobots the war against the Decepticons on Cybertron. Plus, on the moon is an old Autobot leader Sentinel Prime (Leonard Nimoy) who Optimus rescues and revives back on Earth. While this business with Sentinel Prime is going on, Megatron is plotting trouble with Starscream. On the human side of things, Sam Witwicky is having trouble finding a job. One thing he has to be cheerful is he has a new, unrealistic hot girlfriend, Carly Spencer (Rosie Huntington-Whitely) who’s working for some CEO (Patrick Dempsey) of an investment firm. Sam begins to worry about her boss making the move on her but he’s going to have to worry about a lot of other things as well. There’s really no sense in explaining the rest of the plot since you just want to see giant robots beating the piss out of each other.

Like I said before, this movie was a lot better and an improvement. Some things Michael Bay improves on like the action but the stupid, unnecessary things are still around like the two little street-talking robots as Sam’s sidekicks. Thankfully the twin robots aren’t back but these two have filled the place of them. I just roll my eyes every time they are on the screen. It’s just bad when the voice of Spongebob is doing the voice of one of the robots. Clearly there are better people out there that don’t sound stupid. The parents are back for more retard-ness. While they may be funny here & there, their storyline is just out of place in this movie and second movie now that I think about it. Basically the majority of the humans in this movie are pointless. If anything, they should have Josh Duhamel and Tyrese be the center point instead of Shia. Pretty much all Shia did was SCREAM and SCREAM. “OPTIMUS!” “BUMBLEBEE!!” “CARLY!!!” Real tough acting gig. While everyone creams in their pants for Rosie Huntington-Whitely, I just thought she was okay and rather would have Megan Fox back. It’s pretty funny the first shot we see of Carly is her ass cheeks walking up the stairs. At least she knew what type of role she was going to have in this.

The best part of the movie is without a doubt the last hour of the movie. If you wanted to see Chicago being pummeled then this movie is it! Of course they digitally destroyed Chicago but it was really cool to see what they did with the city. The way it seems, if there was going to be a fourth movie, some characters wouldn’t be in it because it seemed like Bay was cleaning house on some characters. The one scene that made me have my mouth wide open in disbelief were the commandos that were flying out of the plane throughout the city. I couldn’t believe they actually did that or did part of it. Now there’s a movie for ya! I wanted to see more of those guys flying in the city with their winged suits. Besides the last hour, the rest of the movie has sporadic spots that are good. Alan Tudyk was great as well as John Turturro. Ken Jeong was really funny in his scenes that he was in, and believe it or not, so was John Malkovich. I usually can’t stand him. The job interview scenes was pretty funny too.

I’m glad I got the Blu-Ray because the quality is simply outstanding! When I saw this in the movie theater, I sadly saw this in 3D and I hated the movie even more because of it. I refuse to see 3D anymore. Everyone was claiming this was great in 3D and I fucking disagree! I couldn’t tell what the hell was going on, and it felt like watching a movie with sunglasses on. So it was nice to see this on Blu-Ray and not have to worry about going cross-eyed and getting a headache from the 3D glasses.

Unfortunately, there weren’t any extras for this which pretty much says we’re going to have a ton of editions of this movie out. So if you really care about special features, then hold off and just rent this movie when it’s available. Other than that, Blu-Ray is the way to go!