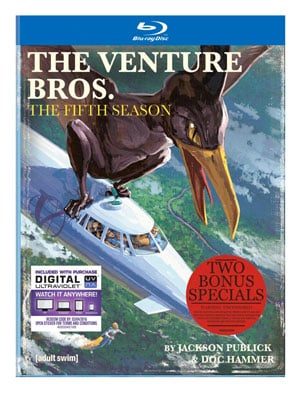 It’s been a long wait but the 5th season of Venture Bros has finally returned! The season is short but it’s still better than no episodes at all. Either way, Venture Bros continues to be one of my favorite animated TV series.

It’s really hard to explain any plot points when it comes to Venture Bros. I find a lot of their episodes are just really random and essentially don’t really go anywhere. That’s not a knock at the show, that’s just how it is and one reason why I like the show. You don’t have to follow along too much. If I had to tackle some of the plot points of Season 5, I’d say this season has Brock working exclusively for OSI (although has run-ins with the Ventures), Gary is apart of S.P.H.I.N.X, Dr Venture continues to be clueless, Dean goes through an emo phase, and The Monarch is still trying to get Dr Venture. The 5th season is only 8 episodes but the Blu-Ray has 2 specials (A Very Venture Halloween, From the Ladle to the Grave: The Shallow Gravy Story) as well.

Season 5 is funny and is certainly great watching these on Blu-Ray because it’s uncensored. You can tell what they are saying during the broadcast, but it’s funnier hearing it uncensored. I found the beginning episode not that great but the season got better as it went along. I liked the episodes that featured Brock and the OSI team and anytime the Monarch showed up. I was kind of disappointed that Dr Orpheus wasn’t really present this season but that’s okay, that’s just a nitpick. The best episode of the season is O.S.I. Love You, where Brock and other members of OSI are interrogated about a mission.

What I love most about the show is how there’s so many pop culture references. Either jokes or characters looking like characters from G.I. Joe. Even the voice-over works cracks up because some characters sound like Ray Romano, Sean Connery and Lorne Michaels. Another example of the funny references was a scene where The Monarch was dressing up like Khal Drogo from Game of Thrones for a little bit fun in the bedroom but Dr. Mrs. the Monarch dressed up like Rocky thinking he was talking about those movies. It’s scenes like that make this show awesome.

Like I said above, there’s 2 specials, plus there’s some audio commentary and deleted scenes. On the technical side, I’m not sure if it was my disc or player but for certain scenes, the animated looked like it was blurring up or something. It didn’t look right but it only lasted a second so wasn’t too bad. Might have just been an error on that disc.

Season 5 was funny but I feel like Season 4 and others were a lot funnier & better. Venture Bros is still one of the cleverest and funniest series on TV (animated or not). Buying the Blu-Ray is worth it for the uncensored audio alone but also because of the 2 bonus episodes and other features.

Bottom Line: A funny season but not as good as the others
Running Time: 198 mins
Rating: NR
Extras Rating:
Overall Rating: