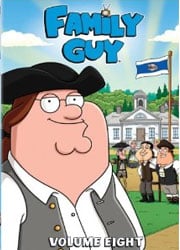 People either love or hate Family Guy at this point. If you’re reading this review, you probably love Family Guy. I’ve been a fan for a long time now and always enjoy Family Guy. At any given point in the day, the show is always on and I always end up watching. It used to be the show I go to sleep to except I’m an old fart now and go to bed earlier than 11pm. But anyway, Volume 8 features some good episode but it always features some duds as well.

The beginning of the Volume 8 starts off with the rest of season 7 for Family Guy. “Fox-y Lady” is the first episode and is about Lois trying out for anchor position at Fox News. The next episode is “Not All Dogs Go To Heaven” and features the Star Trek: Next Generation cast. Stewie doesn’t get to ask them a question at a convention so he teleports them to hang out with the cast. A bit silly yes, but it’s funny to see the entire cast trying to order food in a drive-thru window with Stewie driving. Other Season 7 episode are about: Brian launches a campaign to legalize marijuana, Stewie takes steroids to fight off a girl, Brian starts dating Lauren Conrad from the god awful show The Hills. The hilarious Three Kings episode is 3 part Stephen King centric stories of Stand By Me, Misery and Shawshank Redemption.

Road to the Multiverse is the start of the eighth season and it’s actually a funny episode. It has Brian and Stewie going to all these different realities like the musical Disney universe of Family Guy or the place where the world is run by dogs instead of humans. “Pick up my poop!” But after that episode, the season is mixed with some good episodes and some bland ones. Chevy Chase and Dan Aykroyd guest star in a Spies Like Us homage with Brian and Stewie but other than that, the rest of the volume 8 is a bit disappointing.

Like I said before, the season has it’s up and downs. The 3 Kings episode is definitely in my top 10 favorite episodes of Family Guy. From seeing it a ton in syndication, I still laugh my head off. I just loves the Friends “clapping” reference in the Shawshank Redemption segment. It certainly helps the episode when Richard Dreyfuss narrates the Stand By Me segment and the original music of Shawshank is played. I wish they continue to do episodes like that one.

Sadly, I think Family Guy is started to get stale at times, and they need to pick up their game a bit. Just some episodes seem lazy when there’s nothing but cutaways and stupid storylines. I just kept help but think of the South Park episode where they bash Family Guy when some bad episodes come on. But with that said, there’s still plenty of funny episodes on this DVD and I certainly enjoyed watching them. It’s particularly nice to watch the show commercial free and uncensored too.

The special features include audio commentary on select episodes, a ton of deleted scenes, a featurette on the Multiverse episode and karaoke to sing along to. I listened to most of the audio commentary since I’ve seen every episode 5 times. Seth MacFarlane wasn’t really there for some of them, but would chime in from the sound booth. I think he might have been sick, but I didn’t hear that part of the DVD commentary. The deleted scenes were pretty good and had some funny ones in there. It almost felt like watching an episode there were so many deleted scenes. I liked the featurette on the Multiverse because you find out that they outsourced the Disney animation to someone who has worked on a few Disney movies. The karaoke is kind of silly to have on the DVD, but if you want to know the lyrics to the songs in the show then you’ll like this.

Family Guy Volume 8 has it’s moments and has some great episodes like Three Kings, Road To the Multiverse, Spies Reminiscent of Us, and 420. Although I liked some of the cameos/guest-stars in this volume, I think it’s starting to get a bit much. You can say they have hit The Simpsons proportion where there is a guest-star (and some unwanted) in every episode. I mean, Miley Cyrus and Lauren Conrad in Family Guy? Come on, that’s just over doing it and borderlining of jumping the shark. At least kill them in the end or something! But even with all that said, I still really liked this volume and think it’s worth getting if you enjoyed these episodes.