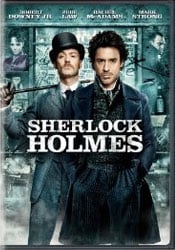 The re-imagining of Sherlock Holmes will either be liked or disliked. I never got a chance to see the film in theaters but I wanted to. After finally seeing this, I’m not sure what to think of it just yet; it was entertaining but sometimes feels off about the film. I just don’t know if I outright liked it just yet.

Sherlock Holmes takes place in 1891 in London. Sherlock Holmes (Robert Downey Jr) and his trusty sidekick Dr. John Watson (Jude Law) race against time to stop Lord Blackwood (Mark Strong) from making another ritual murder. Blackwood is one of the leaders of a powerful occult and wants to rule the world. You know, that old spiel. The infamous duo catch Lord Blackwood and a few months later, he’s sentenced to be hanged. Before he gets hung, he warns Holmes that more deaths will be coming. Somehow, Blackwood returns from the dead and the killing & plotting begin. Meanwhile, Holmes is dealing with Irene Adler (Rachel McAdams), a former lover and thief. She ends up having a major part in the whole plot. Holmes and Watson try to uncover Blackwood’s next steps before it’s too late!

I thought the film by Guy Ritchie had it’s moments but I’m still debating with myself whether or not I liked this. I thought the movie was a bit confusing at times and sometimes boring. I liked the second half of the movie better just because I wasn’t as confused and knew what was happening. I never really watched other Sherlock Holmes movies and TV series, nor read any of the novels by Sir Arthur Conan Doyle. I didn’t really have a problem with Guy Ritchie’s direction or the re-imagining of the Sherlock Holmes story & characters. Based on what the cast & crew have said, Holmes and Watson were action heroes in the books so it made sense for their to be action in the movie. Those scenes were certainly the most entertaining.

The acting wasn’t bad and I thought Robert Downey Jr did a great job. It was tough at times to hear what Robert when he was saying his lines, because he’s usually saying it fast and in a fake English accent. I liked him as Holmes but I’m still scratching my head over why they picked him instead of a British actor. But then again, he does accents quite well so I can see why they picked him. Jude Law was great as Watson, and I liked how Watson was more active and really getting into the action. He was more of a bad-ass than Holmes was. the chemistry between Downey Jr and Law was really good as well and I’m looking forward to seeing them work together again. I like Rachel McAdams in most movies but not sure I liked her in this. She kind of felt out of place. I’m really glad to see Mark Strong popping up in more movies since Rock n Rolla and Stardust. He’s also playing the villain in Kick Ass, directed by Matthew Vaughn; who’s been a producer for some Guy Ritchie movies. He definitely seems like he’s one of the go-to-guys for bad guys in movies now.

The only extra that is included on the DVD is a 15 minute featurette called “Sherlock Holmes Reinvented.” Guy Ritchie and others talk about re-inventing the character of Holmes and Watson, plus there are interviews with the actors as well. It was okay to watch after the movie, but I wish the extras were more in depth.

All in all, Sherlock Holmes is entertaining at times, and it’s sometimes confusing. Some people might even think Sherlock Holmes is boring. I think I’ll end up liking the movie better when I have watched it a few times. That’s usually the way I feel about every Guy Ritchie movies. I usually get that “eh, it was okay” feeling but once I see it again, I enjoy it a lot more.