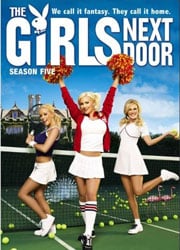 The latest season of The Girls Next Door is the final season that all 3 girls are Hef’s girlfriends. There are plans for a 6th season but nobody knows how that’s going to work out since everyone has gone their separate ways. Kendra married football player Hank Baskett, Bridget has her own show on Travel Channel and Holly is living in Vegas I believe. Despite all that, this season of Girls Next Door is fun to watch; but you can slowly see the relationship between them all starting to go in other directions.

The fifth season DVD starts out with “Change of Undress,” where Holly Madison decides to re-decorate the playmate house. It’s the house where the playmates stay and it was very outdated looking. It seems Holly has been on a mission to change everything of Hef’s and getting her feet further into the door of the estate. I mean, why else would you date a 200 year old horny billionaire? One of the biggest storylines this season was when Holly was off trying to find the 55th anniversary episode. This exhausting storyline lasted 4 episodes at least. Take a drink every time Dasha mentions “Ukraine.” Other episodes include: Hef and the girls go to the Kentucky Derby, Kendra having a sexy softball game with old playmates, Bridget makes her bad thriller movie, Hef and the girls visit Barbi Benton in Aspen, and the girls attend Stacey Burke’s wedding in Vegas. The one episode that isn’t included is the final episodes of the season. I guess they are calling it a special 2 part episode where the girls go their separate ways. It’s really dumb it’s not on here.

This wasn’t the best season of Girls Next Door but its certainly mindless entertainment. I have no idea why women love this show but apparently they do. I can see why guys do. I love when DVDs are uncensored, and show everything and aren’t cut out or blurred. It kind of makes me not want to watch the telecast and just watch the DVDs instead. Plus you never know how much cursing is going on until it’s all uncensored. Like I said above, the search for the 55th playmate didn’t need to be 4 episodes, and probably could have just done 2 episodes of that. After awhile, it was just tiresome to watch. The Barbi Benton episode was a bit whacky. Her house is huge and weird at the same time. The softball episode was fun to watch, and I really like the Mardi Gras episode as well.

As the season went on, you can tell that things were started to change, obviously in the special at the end of the season. Still baffled as to why that wasn’t included on the DVD. Kendra was the first noticeable one. Kendra and Bridget both had farewells in the 2 part special but there was only some assumptions made that Holly was going to break up with Hef. At the end of the 2 part special, Hef sits down and watches a movie with his younger, current girlfriends, Twins Karissa and Kristina Shannon. Honestly, I like Bridget, Holly and Kendra better. The twins seem really stuck up. If they plan on making a new show out of his new girlfriends, I’m not sure how that will work out. Everyone has invested in a lot of time with the original “girls next door.” To start watching new Hef girlfriends, it might alienate the viewership. Or maybe not? But I guess we’ll find out if there is a sixth season. You are watching a show about Hugh Hefner, who had 9 girlfriends at the same time at one point.

If you enjoyed the other seasons of Girls Next Door, you’ll like this season as well. Sometimes you fee like you’re watching a scripted show or some things are setup, but it’s still fun to watch. Just mindless naked good fun! Too bad the girls moved on to other things, but could you really see those relationships working out? Yeah didn’t think so. The DVD itself has some commentary and deleted scenes, but that’s about it. How about include the final episodes on the DVD next time perhaps?