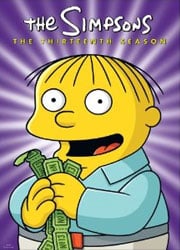 No lie, it’s been about a year that I’ve seen a single episode of The Simpsons. After watching them for so many years, I just got burnt out and didn’t want to watch them anymore. Besides, I just think the new episodes aren’t funny and not what the show used to be. But with that said, Season 13 had some good episodes (and bad) and I remember originally liking this season. But you can tell the show is on the decline from this point forward.

The Simpsons Season 13 starts off with the annual Halloween episode “Treehouse of Horror XII”. In that episode, Homer pisses off a gypsy and she curses him, and turns him into a walking bad luck charm. The next segment is about a Pierce Brosnan speaking super computer that controls the Simpsons house. Not really Halloweenie. The final act is a spoof on Harry Potter. The first half of the season features episodes about: Homer and Bart get tethered together, Moe turns his dive bar into a hip nightclub and makes Homer mad, Lisa converts to Buddhism, the two barmaids Homer and Ned married in Vegas return, and Homer ends up getting his jaw wired shut. Some of those episodes are okay, and some in the beginning of the season stink. I’ll get into that later on though. Other notable episodes in this season include: The Bart Wants What It Wants, Blame It On Lisa, Tales from the Public Domain, and I Am Furious Yellow.

I mentioned above some episodes were bad. The one that stands out was the Blunder Years. Having to hear Homer SCREAM annoyingly the entire episode is not my idea of fun. I love Homer but that has to be one of the worst episodes of The Simpsons. Actually, now that I think of it, there was more than one episode where Homer kept screaming and screaming. Seems like crew of the Simpsons got carried away with it that season. You just get the sense during this time that something is changing with The Simpsons. Things start to become predictable and mundane with the way the episodes are written. Funny intro, story setup, boring middle and then random finale. In fact, that always got me annoyed how funny the first 5 minutes of the Simpsons were. Then they went into other directions and the funny was sucked up. That happens a lot this season. Plus, did we really need another clip show? Haven’t The Simpsons had 5 clip shows before “Gump Roast.” Although, I guess the cheesy song at the end of the episode apologizes for another clip show.

With the negative out of the way, I still enjoyed watching most of these episodes on DVD. It’s nice to see these again, and I particularly like the episode when they went to Rio, or when Bart dates Rainer’s daughter. I always remember that funny line from Rainer where it’s a reference to Commando. “Remember when I told you I would eat you last…I lied.” Funny stuff! I like the the episode I Am Furious Yellow and how Stan Lee won’t leave Comic Book Guy’s shop. You would think he would be happy about that? I always enjoyed episodes like Tales from the Public Domain because it’s the Simpsons characters in other storylines. This time the characters are in the Odyssey, Joan of Arc and Hamlet. One thing I always liked about The Simpsons DVDs are the menus. I just like to leave them on and see what happens. I don’t think the DVD cases themselves are cleverly constructed because when you take the DVDs out, they will scratch. So be careful when putting and taking out the DVDs.

If you like extras, the DVD has a few extra things like audio commentary on every episode, multi angle animation showcases, deleted scenes and more! Season 13 has it’s moments but you can start to tell the series is going downhill from this season. Hardcore Simpsons fans will appreciate this DVD I think.

Features:
Four-Disc Set Contains The Complete Thirteenth Season With All 22 Episodes
A Token From Matt Groening
Audio Commentary On Every Episode With Writers, Actors And Directors
Ralphisms, The People Ball, The 13th Crewman, Blame It On The Monkeys, The Games, The Sweet Life Of Ralph
Multi Angle Animation Showcases
Sketch Gallery I & II
Deleted Scenes
Special Language Feature
Commercials And More!

Bottom Line: Season 13 has plenty to like but also not like as well.
Running Time: 491 mins
Rating: NR
Extras Rating:
Overall Rating: