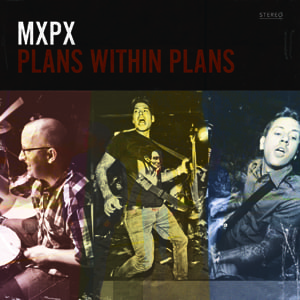 Like I’ve mentioned before, I’ve always enjoyed MXPX’s music and have seen them live on a few occasions, but I’ve noticed something over all of these years…they can make a solid album, but for me personally, they’ve never had any stand out tracks. Most of their songs and albums in general come off sounding like a more pop version of a Bad Religion album. Unfortunately, “Plans Within Plans” is another one of these albums for the boys from Washington.

One thing that “Plans Within Plans” does have going for it is that it sounds more like a classic MXPX album than some of their previous stuff that was borderline emo/indie rock. There are some good songs that evoke memories of “Let It Happen”. There are some fun fast songs and a few songs like “Stay On Your Feet” that are reminiscent of MXPX side project Tumbledown.

Even though “Plans Within Plans” sounds somewhat monotonous and repetitive it was still much better than a lot of bands out there that use the moniker of “pop punk”. The sound is retro in regards to the MXPX catalog with much more punk than one has seen on a regular MXPX release, but, at the end of the day, there just aren’t any memorable songs for me.

Bottom Line: A punkier sound but on an album where all of the tracks seem to run together.
Notable Tracks: If I have to pick…Stay On Your Feet and Cast Down My Heart had some stand out parts.
Overall Rating: