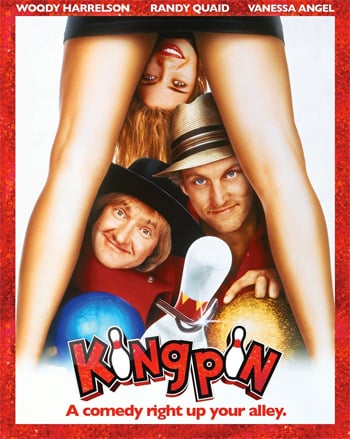 Kingpin was made after Dumb and Dumber and I think it’s an underrated comedy. It’s one of the better Farrelly Brothers movies and it’s available on Blu-Ray for the first time!

The movie is about Roy Munson (Woody Harrelson), a bowling prodigy who ends up winning the Iowa State amateur championship in 1979. He decides to leave his small town behind and join the pro bowlers tour. He encounters bowler Ernie McCracken (Bill Murray) who brings him along to hustle some bowlers for some extra cash, but gets the brunt of the brutality when things go sour. Years later, Roy is living in Scranton, bald and chubby with a hook hand from his encounter he had with the bad hustle years earlier. Roy ends up finding an Amish bowler Ishmael (Randy Quaid) with potential and eventually convinces him to manage Ishmael. They head out to Reno for a big bowling tournament in hopes of winning $100,000.

The movie isn’t Dumb and Dumber or There’s Something About Mary but Kingpin has a ton of laughs in it. I’m sure there are fans that think this is better than Dumb and Dumber. I still think it still holds up after all these years though. Woody Harrelson should be in more comedy movies because he’s great in Kingpin. He’s been in a few comedies since this and obviously Cheers but still, he’s got comedy chops. It’s without saying that Bill Murray is a scene stealer in every scene he’s in. According to the brothers, he mostly improvised stuff on the set and rarely went on script. Randy Quaid has a lot of funny lines as well. This is before he went all crazy and fled to Canada. Having Vanessa Angel in the movie was always a bonus for me, considering I had a thing for her ever since she appeared at the end of Spies Like Us.

The overall movie is vulgar and raunchy at times but what do you expect? I love these type of comedy. Well if its done right; Kingpin does it right though! The Farrelly Brothers have for the most part, succeeded in making you want to cringe, barf and laugh all for the same scene. Scenes with Roy’s landlady and Ishmael flossing come to mind. Roy milking “the cow” is another scene that comes to mind.

I never saw the extended cut before but its honestly not that special. It has some added backstory in the beginning with Roy and his Dad. That’s about the only stuff that I could remember from the extended cut. The bonus about this Blu-Ray is it has both versions. Other features on the blu-ray is a new featurette with Bobby and Peter talking about the movie, the cast and the story while bowling. There’s also a commentary track and a trailer but that featurette is pretty good and thankfully, it’s an updated feature so it’s worth watching.

Kingpin still holds up as a funny comedy with an hilarious cast. I don’t think it’s the best Farrelly Brothers movie but it’s certainly up there and hell of a lot better than the crap they released after the 90s.