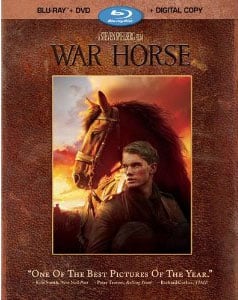 War Horse is based on the children’s novel and stage play of the same name. Anything that Steven Spielberg touches is instantly epic, and War Horse is no different. It’s an excellent movie filled with gorgeous scenery, a great cast and a beautiful score by John Williams.

The movie is about a horse that starts out working on a small English farm in Devon, and ends up in World War 1. Albert Narracott’s (Jeremy Irvine) father Ted (Peter Mullan) drunkenly bids on a horse that isn’t really a plough horse. Albert grows really fond of the Joey the horse and makes him plough when the time comes. The family keeps having financial troubles and eventually Ted has no choice but to sell Joey to Captain Nicholls (Tom Hiddleston) in the British Cavalry. Albert tries to enlist but is too young then. From there, Joey becomes in possession of several different people over the course of the war. It’s an interesting look at World War I, as this horse goes from person to person.

Steven Spielberg is without a doubt, one of my favorite directors. While I don’t like every movie he does, I’ll certainly make an attempt to see all of his movies. War Horse is a very good film and one I think I’ll enjoy with each viewing. This is a war movie without being a war movie. This time around, war is only the setting and not necessarily in the forefront like other Spielberg directed/produced movies. I found the story to be very interesting and remarkable how one horse encounters so many individuals. It was a clever way of showing the different sides of war. The young British Captain, young German soldiers, a French grandfather and granddaughter, and other people. It humanizes everyone and there’s no bad/good/etc; just people caught up in a giant war. It’s also interesting because it started with you a young farm boy and ultimately circles back around to him.

This movie needs to be seen just for the beautiful English landscapes and John Williams’ beautiful score. The landscapes and lighting looked a bit artificial in some scenes, particularly the lighting at Albert’s farm. You can tell that it was probably raining and cloudy when they shot it and enhanced the scenes with white light. The movie is a bit long but I guess with all the people Joey encounters, it had to be. My favorite part of the movie had to be was towards the end at No Man’s Land. He’s stuck and has two sides calling for the horse. Finally one British soldier and a German soldier meet to help the horse and had me chuckling a few times. Lots of little moments that makes this a good movie to watch on a boring weekend.

The Blu-Ray offers plenty of extras like roundtable discussion with Spielberg, producer Kathleen Kennedy, the cast and crew. I definitely enjoyed watching that one. Unfortunately the second disc wasn’t working for me so I have no idea how things were. For some reason, the Touchstone logo was just playing and nothing else works. Couldn’t get to the the main menu, couldn’t fast forward. I’ve been noticing more and more Blu-Ray movies have been doing that to me and it’s really annoying. But if this issue is just with my Blu-Ray set, then you can watch featurettes on John Williams, sound production, editing, more behind the scenes stuff.

I thought I might be disappointed or extremely sad after watching War Horse but I didn’t feel that way at all. Really I’m a big cry baby when it comes to war & animal movies. War Horse is a movie worth seeing, especially if you like movies by Steven Spielberg!

Features:
War Horse: The Journey Home – Discover How this Extraordinary Film Came To The Screen With Steven Spielberg, The Production Team And Cast
An Extra’s Point Of View – Experience The Shoot From The Perspective Of A “Background Artist”
A Filmmaking Journey – Join Director-Producer Steven Spielberg For An Unprecedented Look Into The Making Of War Horse, And Learn Why The Film Was Both A Filmmaking Journey. . .And A Journey Of The Heart
Steven Spielberg, Editor Michael Kahn and Composer John Williams Discuss The Film’s Editing And Music, As Well As The Secret Of Their Forty-Year Collaboration
The Sounds Of War Horse – Sound Designer Gary Rydstrom Explains The Movie’s Sophisticated Sound Design
Through The Producer’s Lens – Producer Kathleen Kennedy Shares Photos She Took During Filming
War Horse: The Look – Explore The Stunning World Of War Horse With its Creative Team