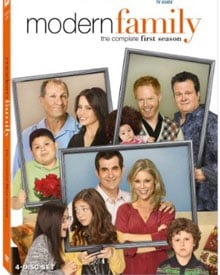 My favorite new comedy is coming to DVD and Blu-Ray on September 21st! I’ve been a fan of this series since day 1 and was consistently funny the entire season. I’m sure others might not like this but I found Modern Family hilarious almost every episode. It has a great ensemble cast, excellent scripts & jokes and is just a fun show to watch every Wednesday night. Plus, it’s just nice to look at Sofia Vargara and Julie Bowen. I’m looking forward to seeing the episodes again on DVD.


2010 Golden Globe® Nominee For Best Comedy And Recipient Of DGA And WGA Awards*, All 24 Episodes Reunite As One Big Happy Family On Blu-ray and DVD September 21

LOS ANGELES, CA (July 7, 2010) – One of the highest rated new television shows of the year, the engaging, honest and hilarious “mockumentary” view of today’s non-traditional households, “Modern Family” The Complete First Season debuts on Blu-ray and DVD September 21 from Twentieth Century Fox Home Entertainment. Come join the family for the laugh-out-loud and critically-acclaimed breakout hit of the year, featuring an all-star cast led by two-time Golden Globe&reg nominee** and recently announced recipient of his own star on the legendary Hollywood Walk of Fame Ed O’Neill (“Married…with Children”), Sofia Vargara (Four Brothers), Julie Bowen (“Boston Legal”), and Ty Burrell (Black Hawk Down). Created and produced by industry veterans Steven Levitan (“Just Shoot Me”) and Christopher Lloyd (“Frasier”), “Modern Family” takes a refreshing and funny view of what it means to raise a family in this hectic day and age. Multi-cultural relationships, adoption, and same-sex marriage are just a few of the timely issues faced by the show’s three wildly-diverse broods. No matter the size or shape, family always comes first in this hilariously “modern” look at life, love, and laughter.

A strong contender for the best television comedy series of the year at this year’s highly-anticipated Primetime Emmy Awards&reg, the hit series features “the funniest sitcom pilot of the fall” (James Poniewozik, Time Magazine) and arrives on Blu-ray and DVD as a complete collection including all 24 episodes from the freshman season. Plus fans can enjoy tons of never-before-seen material including cast interviews, behind-the-scenes featurettes, deleted, extended and alternate scenes, a gag reel and more. The “Modern Family” The Complete First Season three-disc Blu-ray will be available for the suggested retail price of $59.99 U.S. / $69.99 Canada and the four-disc DVD set will be available for $49.98 U.S. / $69.98 Canada. Prebook is August 25.

Pre-order the DVD here or the Blu-Ray here.