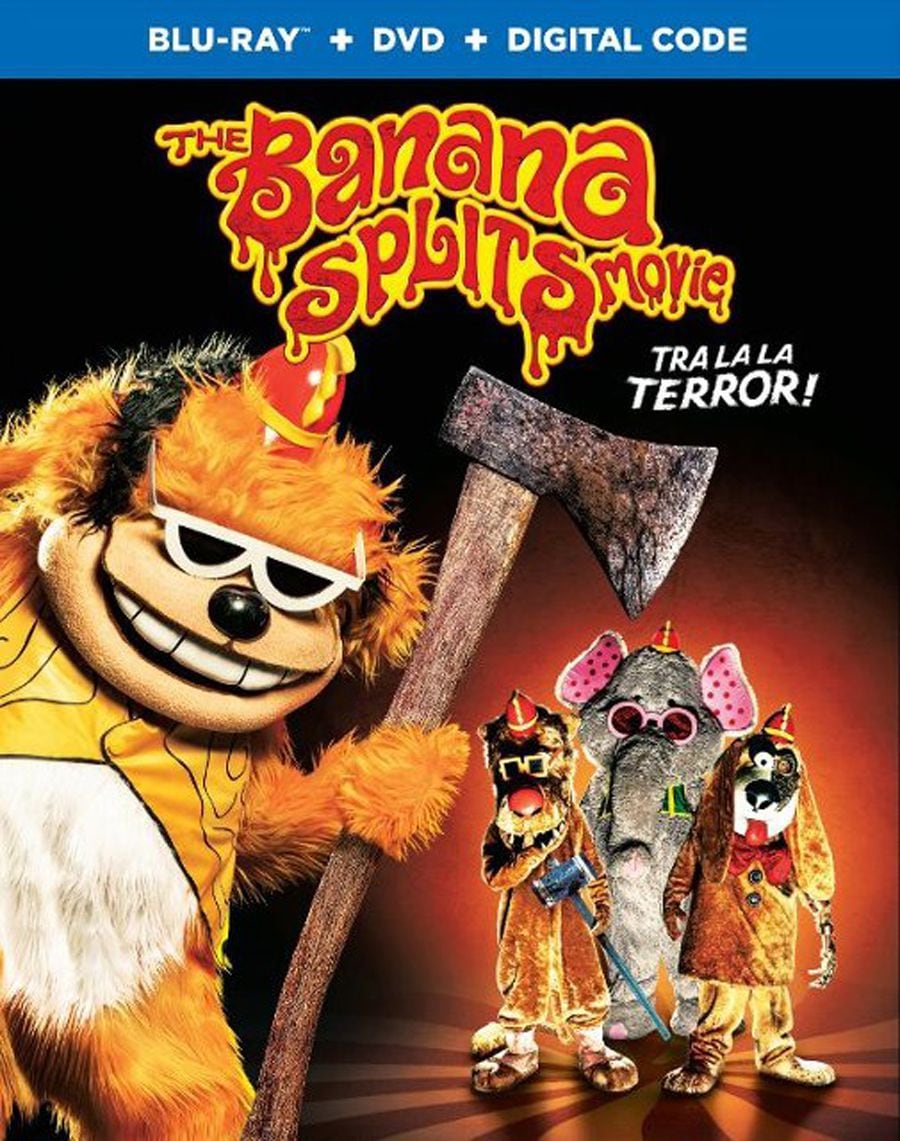 Warner Bros. Home Entertainment provided me with a free copy of this Blu-ray that I reviewed in this post. The opinions I share are my own.

“The Banana Splits Movie” isn’t quite what you think it may be if you grew up on the lovable bunch in the 60s or 70s. You can get the gist of what to expect with this version from the movie cover, which features Bingo holding an axe below a the movie logo that looks like it’s dripping blood followed by the tagline “Tra La La Terror!”. This is not your ma and pa’s Banana Splits!

Pulling some obvious influences from the “Five Nights at Freddy’s” video game series, “The Banana Splits Movie” features the officially licensed children’s television show characters turning into murderous robots upon finding out that their show was cancelled and then going on a killing spree with their live studio audience. This is definitely a far cry from the original show but all in good B-movie campy horror fun.

Dani Kind stars as Beth, a modern day hardworking mother who wants to surprise her son with a trip to a live recording of his favorite TV show “The Banana Splits”. With some animosity from her family and over-the-top douchebaggery from her husband Mitch (Steve Lund), they reveal the surprise to Beth’s son Harley and prepare for the show. A few days later and the day had finally come. Outside of the studio are young children and adult fanboys and girls of the show. When the Banana Splits, who are robots that look like people in felt suits, arrive to the set they nearly run over Harley and display no emotion or reaction to their actions…probably because they’re robots.

With the filming set to begin, Beth’s son Austin manages to talk a production page into backstage passes and a meet-and-greet with the Splits. The show goes on with the Splits arriving backstage after some backstage murderation after a failed update and learning that their show has been cancelled. They abuse their human stage partner Stevie, who is no more than a drunken douche, and then head backstage to do some more murdering…this time Stevie falls victim to their furry mitts.

With some contest winners and Beth and family backstage for the meet-and-greet, the Banana Splits stand motionless but are minus a couple of members. A douchebag parent, who is looking to promote and exploit his daughter for the sake of showbiz, distracts the page and causes a ruckus with the meet-and-greet. From this point on, the movie goes apeshit with campy gore and over-the-top death scenes. The asshole father gets his face melted off, poor Stevie gets an oversized lollipop shoved down his throat, the new producer who canceled the show gets tied to a torture wheel and is bound and quartered, the old producer gets her head smashed in with a hammer and the rest of the adults in the studio audience are killed off camera and left in a pile of human remains.

Beth and her family manage to fend off the evil Splits and free the children from the audience, who were chained together in the basement as the Splits planned to keep them there to watch their show until they either die of starvation, dehydration or boredom. We do get to catch a glimpse of Harley’s favorite Split Snorky, an elephant robot who fought its programming and fended off the evil Splits, giving Beth and Harley time to escape. We then get to see Mitch, who was caught cheating on Beth, get rundown for good after surviving a previous assassination attempt, but this time instead of it being by the Splits we see that the young fangirl who witnessed Drooper saw her new fiancé in half, riding in the cart with the remains of the Splits in tow.

Never expecting a campy horror movie to stem from the classic TV show, “The Banana Splits Movie” was a fun and campy horror movie in the vein of “Silent Night, Deadly Night” or “Slugs”. The writing left much to be desired as at times the plot would be abandoned in order to jump to the next random scene. If you went into this movie expecting anything less, then you’re in the wrong theater. While there were some unique death scenes and some oddball gore moments, most of the violence was predicable if not boring. Also, if you had any slither of douchbaggery to your character, you were a target for robot murder. If you can avoid being a douchebag and you just try to be kind and rewind, you’ll be safe from the terror that is THE BANANA SPLITS! Except for every adult member of the studio audience that is…

Bottom Line: The Banana Splits have graduated from campy 60s television show to new millennium murder robots with the full support from Warner Bros. “The Banana Splits Movie” has a fun and sometimes confusing time twisting those characters from lovable to deranged in a 80s horror movie kind of way.