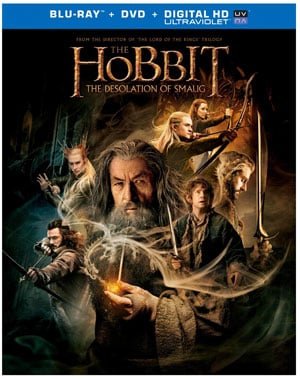 The second part of The Hobbit trilogy is The Desolation of Smaug. The film will probably be hated by some purists, but loved by most. The second part is entertaining and fun and makes you literally wanting more after it’s over.

The Hobbit: The Desolation Of Smaug continues where An Unexpected Journey left off. Bilbo Baggins (Martin Freeman), Gandalf (Ian McKellen), Thorin Oakenshield (Richard Armitage) and the rest of the Dwarves continue their journey to the Lonely Island to reclaim it from the dangerous dragon Smaug (Benedict Cumberbatch). In the meantime, they have to shake the orc party lead by Azog, deal with Wood-Elves of Mirkwood, and find a way through the corrupt Lake-Town. Once they get to the Lonely Mountain, they have that giant pesky problem, how to get rid of Smaug and find the Arkenstone?

The Desolation Of Smaug was just as fun as An Unexpected Journey but left me frustrated with the way it abruptly ended. It was to be expected since the movie was split up into 3 giant movies but I just wish it ended a little more satisfying. With that said, I loved the action sequences, especially the barrel chase. The addition of Orlando Bloom’s Legolas and Evangeline Lilly’s Tauriel was needed and felt familiar in a Lord of the Rings sort of way. I thought I would dislike the character of Tauriel but the story needed more female characters and she certain shook things up. At first I wasn’t crazy about the Tauriel-Kili thing but it sort of makes sense. I see now why they had Aidan Turner play that part and didn’t ugly-dwarf him up. I have a funny feeling what will happen to her in the last movie; same goes with Radagast. Peter Jackson will certainly change things around, just like he did for Lord of the Rings and I’m fine with that…I think.

Another thing not in the Hobbit book was the Gandalf portion of things but I really dug it a lot! I kind of wish we saw more of his side of things but we will in the Extended Cut and the third movie. I also think we’ll see more of Beorn in the Extended Cut because his appearance was really brief. I could see why they trimmed his scenes a little because they wanted to progress the story. Another positive addition to the movie was Bard (Luke Evans). Luke has been in plenty of things but I think he finally has a recognizable role that will get him more leading parts. He was likable and can’t wait to see him kick some Smaug-ass in the third movie.

Special effects were amazing for the most part. Weta crew still can’t manage to animate people on horses but that’s just a nitpick of mine. Some orcs were CG and others weren’t but I had a hard time telling the difference between the two. When the orcs are in the daylight, you can’t tell if they are CG or not. At least not to me. Smaug looked incredible too! I’m glad they held off as long as they could and not show us what he looked liked.

Story-wise, having the added elements helped out the original story like the Tauriel-Kili thing and Gandalf/Radagast stuff. If there was anything that slowed down the movie, it actually was at the end with Smaug. I really liked the scene between Bilbo and Smaug, and then some of the stuff with the Dwarves and Smaug…but I think it goes on too long. It was just one thing after another with trying to kill Smaug.

Since this is not an extended edition Blu-Ray, there aren’t as many special features on here. For the casual movie goer, this Blu-Ray will do just fine. There’s about an hour or so of behind the scenes stuff. You see what goes on during the day at Weta and filming the movie. It’s a nice tease before the Extended Edition comes out and shows us hours of behind the scenes goodness. Besides the set visit, there’s also the production diaries/blogs. If you’ve been keeping up to date with the production videos that PJ posts online, then you have already seen these. There’s also the live event that happened last year that’s on here as well. This Blu-Ray isn’t a total waste but this isn’t for the hardcore Tolkien/Peter Jackson fan. Unless you get this, watch it a few times and then sell it and get the Extended Cut when it will probably be released in October/November.