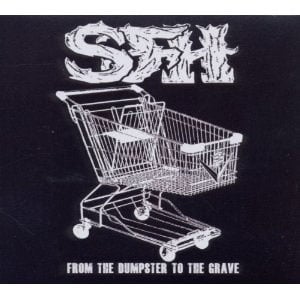 I feel very ashamed that the Star Fucking Hipsters somehow managed to slip under my radar. How did I not hear of this band before? My punk patch should be turned back in to the chief for this one.


Upon immediate listen, I thought two things to myself…one, this band sounds like an amazing amalgamation of the best of the crusty ska bands from the 90’s…an amazing mix of Link 80, Leftover Crack/Choking Victim, Falling Sickness, Against All Authority, and two…the male lead sounds so damn familiar. With a quick stop at Wikipedia I was able to discover that my two thoughts were one and the same. The vocalist/guitarist/founder is none other than Stza from Leftover Crack and they are apparently considered a punk rock “supergroup”. That is most likely the reason why “From the Dumpster to the Grave” is fucking awesome!

I hate to put labels on things but I think that the anarcho/political/crust-ska/punk sound of the bands that I mentioned earlier has been severely lacking in the past decade or so. There was always the right amount of chaos mixed in with political awareness and societal enlightenment. For some reason, political ska bands always seemed overlooked, shunned or deemed nothing more than a punch line for
punk bands in the same vein. That’s usually how it goes with ska bands in general, I suppose. Hey look! They have horns…where’s the parade! It’s very refreshing to hear that the sound is very much alive. Anywho, enough babbling…on with the review.

At first “From the Dumpster to the Grave” follows the Suicide Machines formula of punk song/ska song/punk song/ska song but by latter parts of the album, any and all structure is thrown out the window. “9/11 ‘til Infinity” is a driving, guitar heavy number with a hip-hop flavor that is almost danceable…almost, while songs like “Ana Ng” and “Rapture, Rinse, Repeat” summon everything from death metal to pop rock melodies. I would also like to point out that I was really loving something else that has been missing from the ska and punk scene; the female vocals. Nico de Gallo, who is no longer with the band, had a soothing melodic voice and was the perfect foil for the raspy sound of Stza’s vocals.

“From the Dumpster to the Grave” has to be one of the best listens of the year for me. By no means does it sound like a rehashed Leftover Crack/Choking Victim album. Instead it sounds fresh, vibrant, energetic and important. There truly are no filler songs and just about every song sits with you well after you’re finished listening to it. I guess that’s how you make a great album.